A downloadable tool for Windows and macOS

This looks really cool. I have my own MML interpreter in my games and I export a song to MIDI and convert with PetiteMM to MML and hand edit.

Thanks! If you select, Copy MML, you can just paste it into a text file and edit it. Maybe I will make an MML file export in the future. ;)

I just came across this. This is cool!

I'd really rather not throw this in the comments section, but I couldn't find any other contact information (Forums has registrations disabled, Twitter has DM disabled, itch.io doesn't really have any pm system I know of...), so posting here since it is probably the most relevant place I can post (since it has to do with MML).

Do you take commissions for making programs and add-ons?

That would depend on what you are wanting. I'm currently working on something else right now but I may be able to find some time. What are you wanting?

I'm not in a huge hurry, but one of two things (Either one should work, though the later would help me out more and depending on your price if you decide to do it, possibly both):

1.) Hmm. Not sure why it is freezing but I will look into compiling a 64 bit version.

2.) I'm not sure what programming language or game making app you're using but are you able to call on the DLL I've provided? It's available for download too.

Your best bet would be to ask on the Visual Novel Maker forum and see if calling on dll files is even possible. If not, Macrotune would have to be completely rewritten in Javascript and I don't have time for that. Sorry I couldn't be more help.

I just learned something new, never learned before about MML or anything about it. Thanks for this tool! Here, I created a simple music (took me long enough because of trial and error for notes, I want to know if there's any note identifier software) ---> We will rock you.mmlp

I'm not sure what you mean by note identifier tool? Thanks for sharing your MMLP! Very nice! You can always share your MML project on the forum too, using the copy and paste buttons in Macrotune.

Oh I didn't know there's a forum. Thanks anewey
For a complete beginner, it's really hard to put exact notes of the song though I have an idea, I'll just test it with my guitar lol... 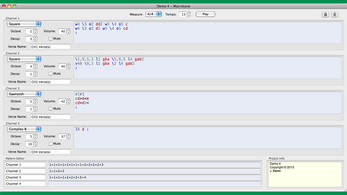